Some Tips on Cooking  Your Catch

There are many common methods used to cook fish; the most popular are described below. There’s one important point to make about cooking fish: leave it alone! When you place the fish in the pan or on the grill, let it cook undisturbed for 2-4 minutes before you touch it. The fish will develop a nice crust and will release perfectly when it’s ready to turn. 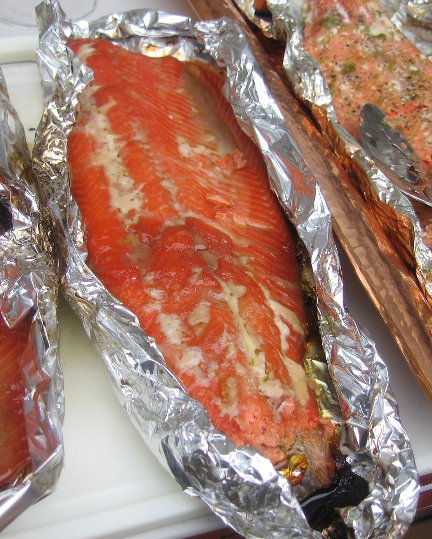 The sturdier and fattier fish, including grouper, salmon, tuna, swordfish, and shark, grill beautifully. Make sure that your grill is very clean and oil it lightly before adding the fish. Then leave the fish alone! If the grill is properly preheated and prepared, the fish will develop a nice crust and will release when cooked. For more delicate fish fillets, using a grill basket will make grilling any type of fish much easier. Just be sure to remove the fish from the basket as quickly as possible so it doesn’t stick. I like Nigella Lawson’s method for cooking thinner fillets on the grill; she simply puts a sheet of heavy duty foil on the grill and cooks the fish on that. Don’t cover the grill as the fish is cooking; the cover traps too much of the smoke and overseasons the flesh.

A bamboo steamer is a great investment if you like this method of cooking fish. To steam fish, place water or stock in a large saucepan and add seasoning ingredients; everything from lemons to ginger will work. Bring the liquid to a simmer, place the fish in the steamer(s) and place over the simmering water. Do not let the liquid boil; this will cook the fish too quickly and it could overcook in seconds.

The microwave oven will cook fish very well as long as you follow a few rules. First, make sure that you rotate the fish halfway through the cooking time so the fish cooks evenly. If the fillets are of uneven thickness, fold the thinner parts under each other so the fish is about the same thickness throughout. And standing time is very important; let the dish stand on a flat surface according to the recipe so the food finishes cooking.

Broiled fish can be really delicious, especially if you season the fish well before cooking. Be sure to preheat the broiler before adding the fish. Make sure the fish is 4-6″ away from the broiler and watch carefully. Thinner fillets (1/2″) probably won’t have to be turned over; thicker fillets (1″) should be carefully turned halfway through cooking.

Baking at a high oven temperature really concentrates the flavors of fish and helps the sugars on the surface caramelize for superior flavor. Roasting is baking at temperatures above 400 degrees F. You can season the fish with just about anything you like before roasting.

Fish is poached in a flavored liquid called a court bouillon. Just about any aromatic herb or vegetable can be used in the poaching liquid. There’s one important rule for poaching: do not let the water boil! The liquid should be barely simmering. If the water boils the outside of the fish will overcook quickly.

Most crockpot recipes call for adding the fish toward the end of cooking time. At high temperatures, 1″ pieces of fish will cook in about half an hour. Be sure to carefully follow the recipe instructions when cooking fish in a crockpot or slow cooker.

Baking is one of the easiest ways to cook fish. Just follow the recipe instructions for cooking, covering, and standing times.

Using just a bit of olive oil and making sure to preheat the pan are the two tips for a perfectly sauteed piece of fish. Also remember to let the fish cook undisturbed for 2-3 minutes to develop a nice crust. Be sure not to crowd the fish; cook it in batches rather than overcrowd the pan. The best way to saute thin fillets is to cook over medium high heat for 2-3 minutes, then turn, cook for another minute or two, then remove the pan from heat and let the residual heat cook the fish. Cook thick fillets 5-6 minutes on the first side, then reduce heat to medium and cook for 4-5 minutes longer.

Deep fried fish is usually battered, then gently lowered into 375 degree oil and cooked for about 4 minutes per side, turning once and carefully.

Cooking fish encased in parchment paper or foil is a wonderful way to get the best results. The paper or foil holds in the moisture, concentrates the flavor, and protects the delicate flesh. Follow the folding and cooking instructions carefully. The packets can be cooked in the oven or on the grill.