Had an all day trip on Wednesday with a group of past clients.  We started out fishing salmon but the first landed fish was a Cisco.  One small king later the copper wire rig took off like a lightning bolt, fish on.

It was a battle while the fish screamed out more line.  Look out, downrigger line screaming with another king.  What seemed like forever and the fish continuing to cross over each other the fishermen kept dancing to try and keep the lines from crossing.  After fifteen minutes, we saw the fish that hit the downrigger, a nice three year old King.  Then it happened, one more run and it was gone.

Still had a King on the wire.  Papa battled that fish and was almost back to the leader and it spit the bait.  A lot of excitement and nothing to show.

Trolled north out of the harbor and boom, we boated a two year old salmon.  Now the sun was higher in the sky and the salmon bite pretty much ended.

As we got north, we switched baits and started trolling for Lake Trout.  over the next two hours we landed ten trout and had several other hits.

Tally at the end of the day, ten trout, two salmon and a cisco.  It was a great day.

We are still holding the same out on the lake.  Trout fishing remains strong with limit catches on most trips.  We are seeing a lot of nice fish in the 5-10 pound range.

Salmon fishing is spotty.  We see them one day and they are gone the next, and i mean gone.  Reports of salmon catches of maybe 7 fish and the next day they are gone.  Here is hoping that we have a batch of fish that want to stay around

Was out yesterday with a bunch of friends and landed a 22 pound King Salmon.

Been a long time since I have been part of the fight of these fish.  There have been several days of charters catching kings.  Hopefully we will see more this year.

The boat is in the water and ready to go.  Drew and I tool a little trip to make sure that things are ready for the upcoming season.

First reports are for lots of trout and some of them in the mid teens for weight. 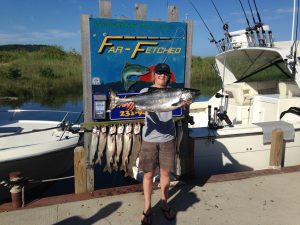 I cannot believe how good our Lake Trout fishing has been.  We continue to have almost limit catches and some fish are in the ten pound range.  This is the best kind of fishing for kids.  Lots of action and smiles when that many fish are getting in the boat.

I just had a great report from a port just south of us that he caught three nice salmon.  I have been seeing a lot of bait and if we have a batch of salmon move in they might stay a while.  I can tell you that a lot of us are hoping that happens.

The weather has been great, time to book your trip